This fast moving storm dropped 10 inches of extremely heavy snow on us in a matter of hours. Trees still had most of their leaves. With the heavy snow clinging to them, massive numbers of branches and many whole trees fell to the ground. Damage to power lines was extensive, Our electricity was out for 8 days. Some homes in our area where out for 12. That is the longest power outage I ever experienced. Branches fell across both of our vehicles. Luckily they landed on top of the first 6 inches of snow, and did no damage. Most all the heavy snow melted in a few days, causing flooding. During the recovery, nights were cold, several below freezing. A Winter storm like this, when daytime high temperatures could be below freezing and lows below zero would have been terrible. Most people had little or no heat. 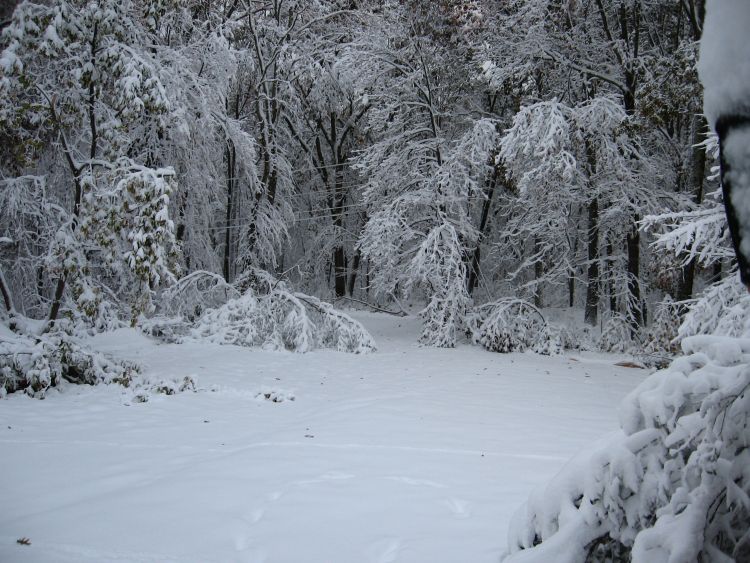 This is the view up our drive way in the unhear... 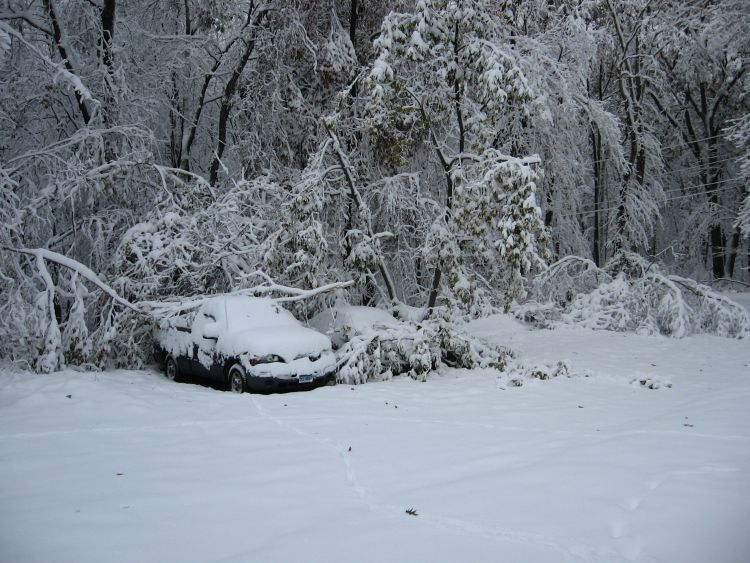 Both our vehicles had fallen branches land on t... 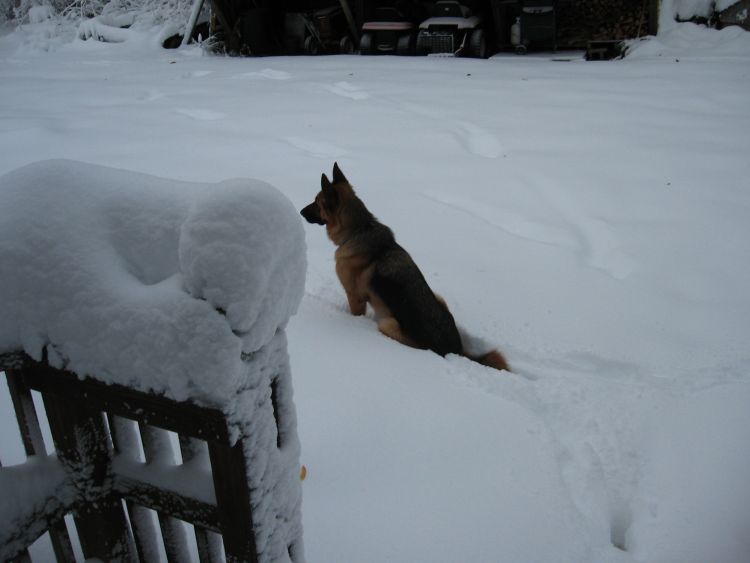 Our alert German Sheppard is on duty in the 10 ...

A friend who has a Tree Service Company told me after the storm, he was getting 4 calls per MINUTE for work removing downed trees. Now 18 days after the storm, his company is still removing trees which have fallen on homes. Yesterday we went to a Doctors appointment, and huge piles of broken branches lined the streets in the small city we drove through. In a city, they will be picked up for property owners. It is hard to believe all those branches will be removed before snow fall here in Connecticut.

The vast majority of gas stations in the state could not sell gas without power. I learned from the radio most gasoline sold in Connecticut comes through a pipeline and is pumped by commercial electricity which had failed. There were shortages and limited deliveries to the few open gas stations, and they sometimes sold out before they had another delivery. Long lines formed, and limits on how much gas you could put in a container were made. At one point, our Governor made a comment that no one should be filling cans of gas after the storm. I suppose from his warm command center, he saw no need for chain saws and generators for the citizens. 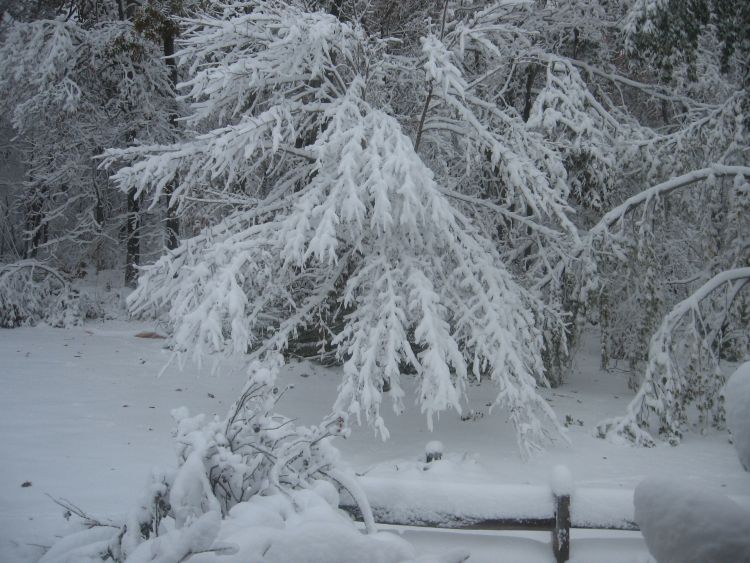 The branches hang much too low in this view fro... 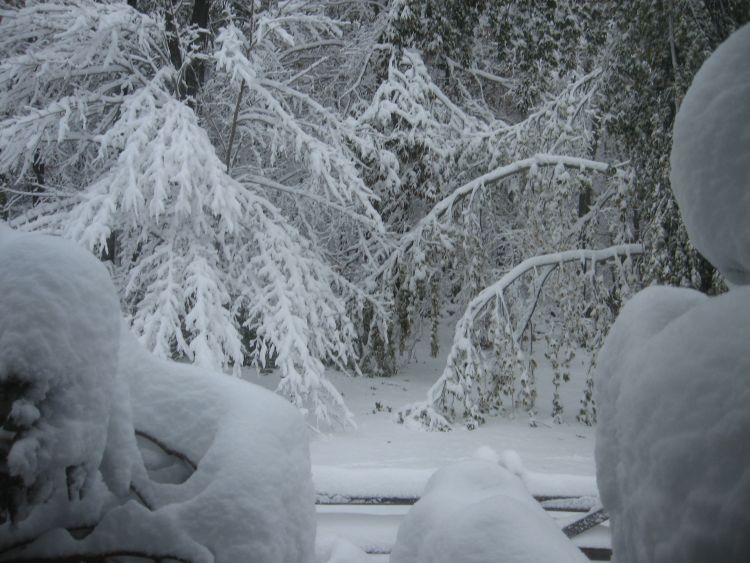 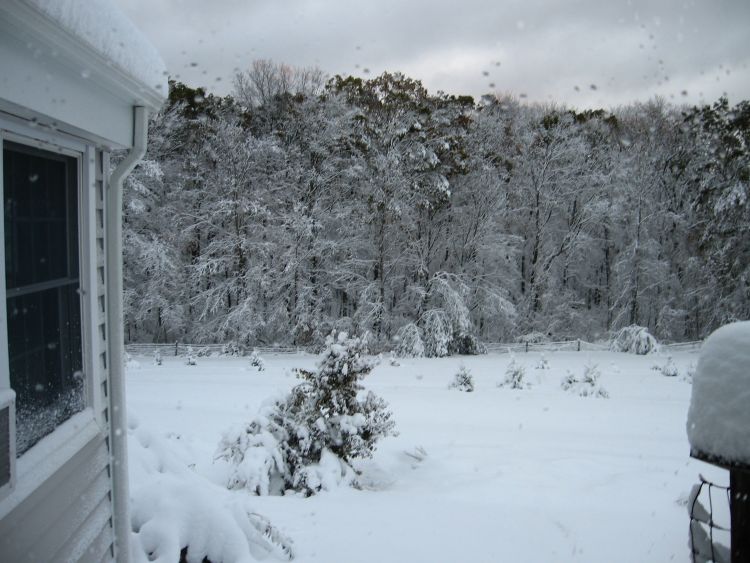 This is how it looked from the window over our ...

Perishable foods were lost in grocery store coolers. The few food stores open in the first week after the storm could not clear checks and process electronic payments such as credit cards. They sold canned and dry foods for cash only. There were a very few grocery stores with back up generators able to maintain refrigeration. Without Internet and with overloaded cell phone service, it was hard to find out where the few grocery stores which were in operation were. Long lines also formed to buy small bundles of fire place wood. 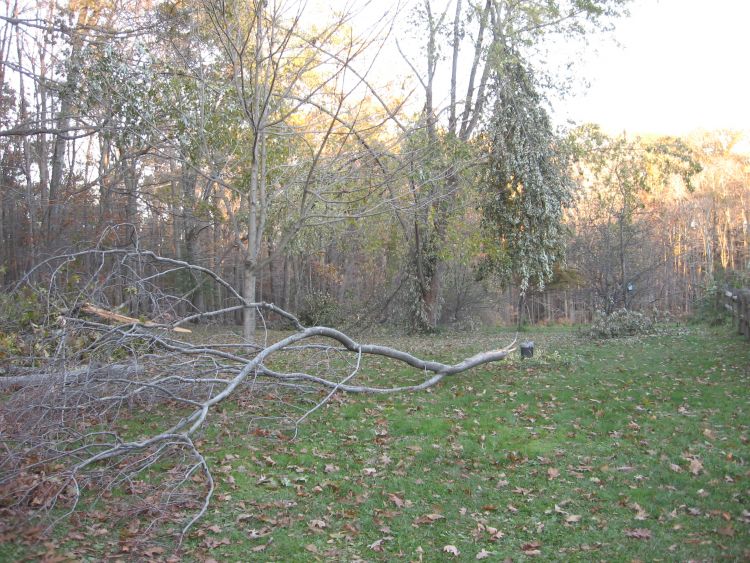 We had a highly unusual October 2011 snow storm... 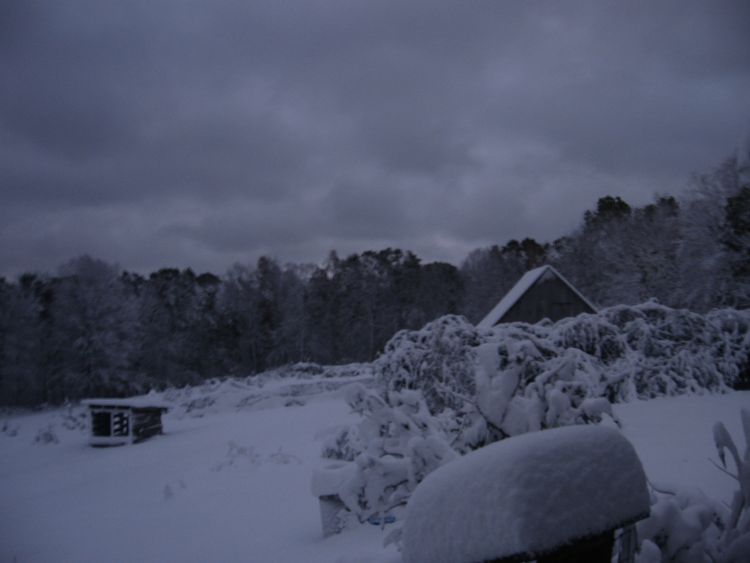 A view toward the barn shows some of our apple ... 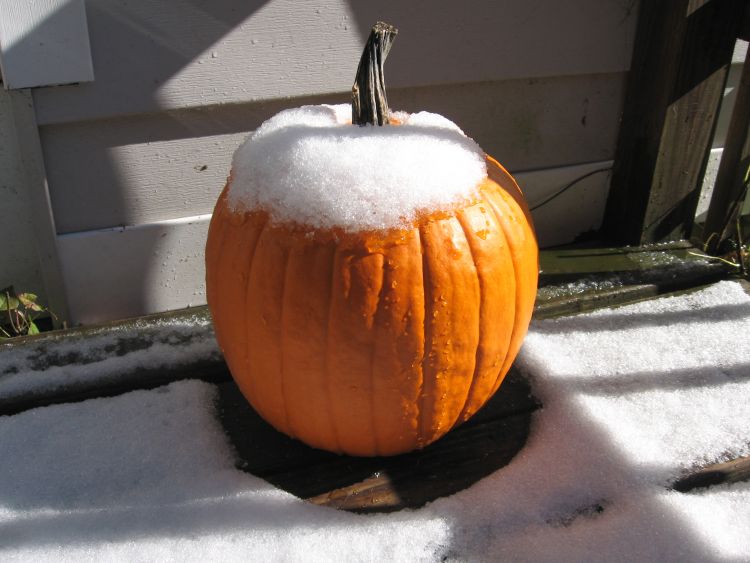 This door step pumpkin for decoration seemed to...

WTIC radio from Hartford, CT went to storm coverage programing and helped convey important information. Listeners would call in to report reopening gas stations and grocery stores, but many called just to complain. Local shelters opened across the state for people to warm up, take showers and recharge cell phones. Some had cots and warm food. MRE's were also distributed. We were able to just stay home.

This quick storm effected parts of West Virginia, Pennsylvania, New Jersey, New York, Massachusetts and New Hampshire, but almost all of Connecticut. A friend in the hills of western Mass. got 2 feet of heavy snow and many local roads washed out leaving holes as deep as 8 feet where the road had been. A huge retaining wall along the road in his town was completely washed away just weeks after in had been completed. In some southern New Hampshire towns, more than 30 inches of snow fell.

When ever there is a local power outage, background radio noise drops dramatically. It is much easier to hear distant stations. If the power outage covers a wide area, many stations may be operating on less power and some may be off the air entirely. It is a great time to hear far away AM and SW radio stations. This is the time to check what all news format stations are reporting from the black out area. A modest radio which is sensitive will work very well. Features to help with station crowding and to block radio noise are not so important.

One of the major Cell phone companies had a high percentage of tower failures, leaving most of their customers with little or no service. Our cell phone company did better, but hours did pass when we could not get a call through to check on elderly friends and relatives. Text service uses far less resources, and was more reliable. You never really know which services will be effected more than others. You need to prepare for most anything.

This Saturday storm was in the weather forecast days before. That is a very good thing. I spent most of Friday harvesting pumpkins and Squash and getting them into the house. On Saturday morning I dug all the rest of the turnips and beets, and got the vehicles and gas cans topped off and all our batteries recharged. I set up the LED lights, battery radios and propane camp stove. Without days of warning, we would have lost a lot of food and the seeds in the squash and pumpkins. We would not have all the fuel cans full, most of the batteries recharged and the equipment ready to use when the power went out. Our propane camping stove quickly heated water for morning coffee and made hot breakfasts. Later in the day we started the wood cooking and heating range to cook dinner and take the chill off the house. Long ago, people here in New England ate the largest meal in the middle of the day. Especially as we get older, we really need daylight to see well enough to cook and clean up after a meal. An oil lamp or a small LED is OK to get around the house and feed the wood stove. Without good light, it is hard to say when foods are cooked just right, and dishes are really clean. 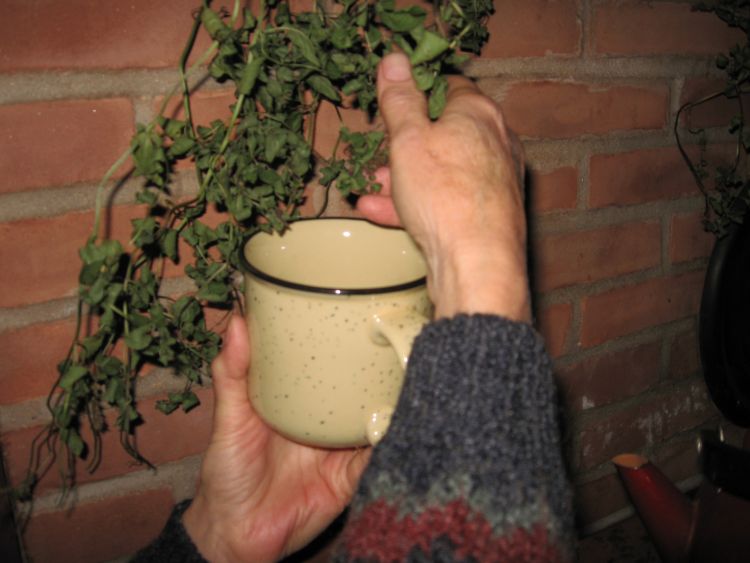 It is easy to crumble dry Peppermint leaves sti... 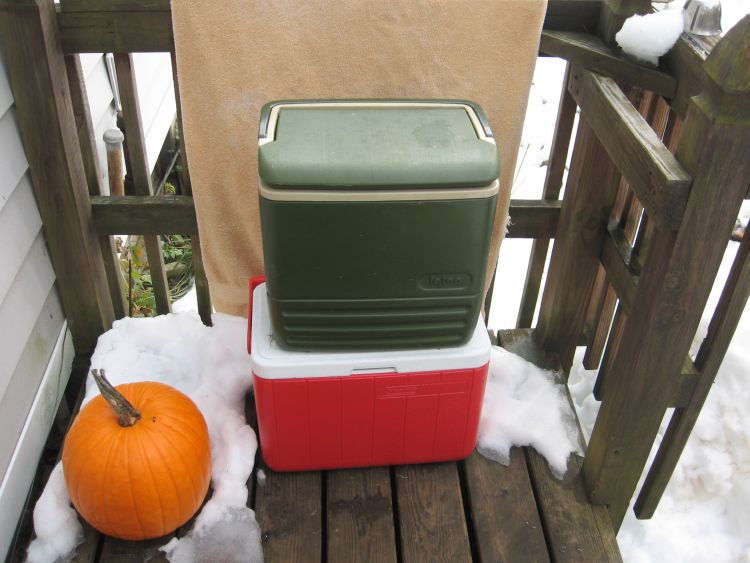 When our power goes out we move food from the r...

So what did I learn? Keep an eye on the news and weather forecasts. Some power outages or disasters will occur without warning. Have enough alternate fuel for cooking, space heating, and communications for longer than you expect to need them. Have back ups for every thing you rely on. Have food, medicine, and most important water stockpiled, and ways to get and purify more water. With a smaller generator, we ran our 8 amp 125 Volt shallow well water pump. We also have a basement hand pump, a Water purifying gravity filter and a good supply of water in containers in reserve. We did not need them this time.

For an 8 day power outage, we were very happy to be able to heat domestic hot water in our oil furnace boiler for showers and dish washing. A fairly small generator can operate the furnace if properly wired. Once the boiler is hot, it heats water passing through it by running the water pump after the furnace. A large enough generator can run both at the same time. I had the water pump and the furnace wired with power cords so they can be unplugged from the commercial power fed outlet, and connected to a completely isolated circuit just for the generator. Our wood fired kitchen range could also heat large amounts of water for bathing and dishes, and we have kerosene stoves which can heat a good size pot on each burner when the wood stove would over heat the house. If we ran out of kerosene, we have rocket stoves which can be used outdoors in good weather and burn scraps of wood branches. 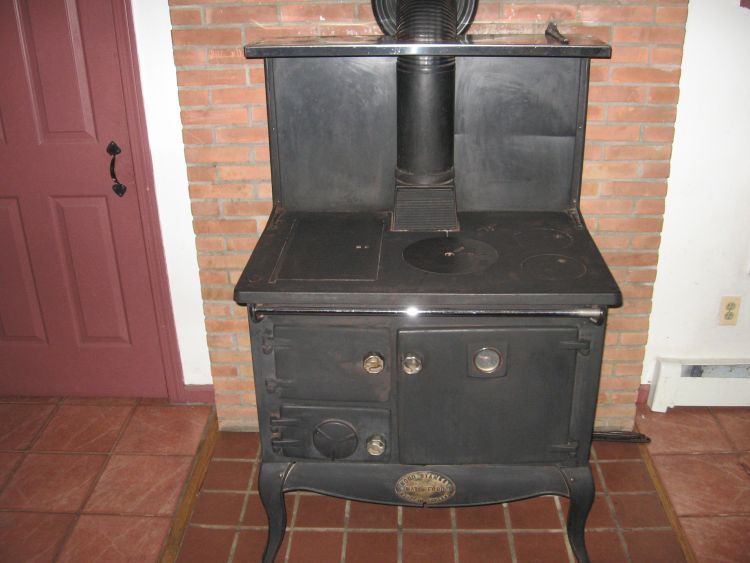 For laundry, I believe our generators could run the washing machine, water pump and furnace, but we did not try that out. For an indefinite power outage, we might shower and do laundry a couple times a week, and not even try to keep the freezer going. If we did not expect to be able to buy more gas eventually, I would have saved all of it to run our very efficient Garden Tractors. I can maintain a 3/4 acre established garden with 5 quarts of gas per year. A large generator can easily use more than that in a few hours. We had one freezer going with crops which do not can or dry that well here, such as peppers and broccoli. I really did not want to lose all that food. So I ran the freezer from the generator a couple hours each morning and evening. After a few days, one of our children called and asked if we could take the thawing food from their freezer. I was glad to help. To solidly freeze more foods, I needed to run the generator much longer. An unexpected, but worthwhile need to fill.

As the power outage continued, our newest and most fuel efficient generator became harder and harder to start. On day five I switched to using an older one we bought in 1987. Another example of a back up for a back up. Without it, we would have lost all the frozen food, and our life would have gotten much more primitive for the rest of the 8 days. All water would have been hand pumped or we would have had to open our sealed water filter elements and use them for long term stored water or water from springs on our farm. 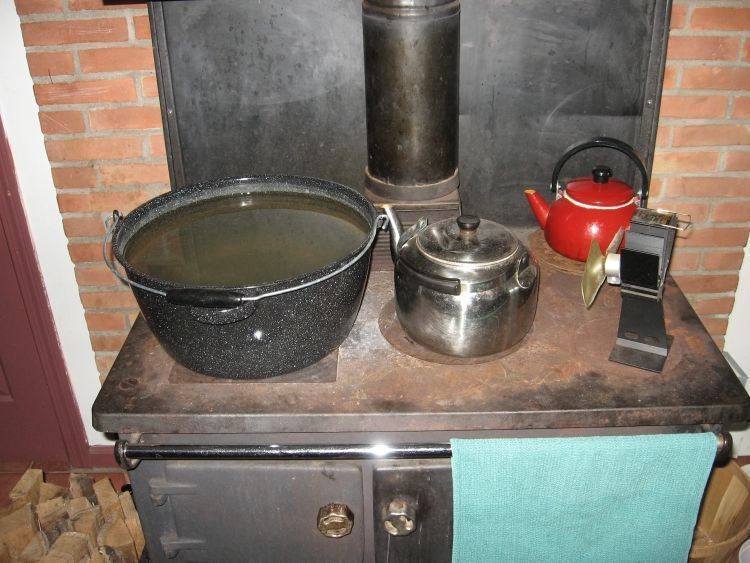 I made notes during the storm. Even with running hot and cold water part of each day, it was a lot more work to do everyday tasks. While the generator ran, we drew buckets of water to flush the toilet. Cooking food, cleaning up, and doing dishes all took more time and planning. We were exhausted every night. After 5 days, I felt isolated without being able to just talk to people on the phone or email on line.

This is my list of what we really needed-

Although we have been preparing for many years, nothing we had done prevented the loss of a number of fruit and nut trees or our tall garden deer fencing. They were all flattened by the storm. We are very thankful to have no trees fall on us or our buildings, and only relatively small branches land on our vehicles. It took us a good part of our lifetimes to gradually accumulate all this stuff. If you are just starting out, do not be discouraged. First focus on water, then food, shelter and heat. Start NOW, we never know how much time we will have until the next problem arrives. A little preparation goes a long way when you are young and able. As you get older, more and more is needed to survive.