Back to Basics Steam Canner Review

When I was a young child, I found a Con-Servo Steam Canner in one of my Grandparents attics. Being curious, I had to examine it carefully and ask lots of questions. It was a large metal box with a door and two sets of shelves like an oven. In the bottom was a pan for water. I was told a lot of jars of food could be canned in this at once, using steam instead of hot water. Most people were still pumping or even carrying there water by hand when that old unit was made.

Over the years I occasionally saw more of these huge steam canners. Some covered two burners and must have held more than two dozen quart jars. All I found were rusted through, and could not be used.

Years later I spotted the same type of canner in the Lehman's Hardware Catalog. It had shelves for two layers of jars, a water pan and vents for steam to escape. But it still seemed too big for our families canning, so I never ordered one.

A few years ago I spotted the Back to Basics brand Aluminum Steam Canner. Designed for 7 quarts or for a few more pint jars. Recently I ordered one to test, and I am very satisfied with how quickly it is ready to process foods normally done in a water bath canner. This is NOT a pressure canner! It is for fruit and tomatoes. It's ONLY for high acid foods normally canned in a water bath type of canner. We used it for relish, which contains enough vinegar to be considered high acid. I don't believe the USDA has established approved processing times for steam canners, but they have been used successfully for generations. 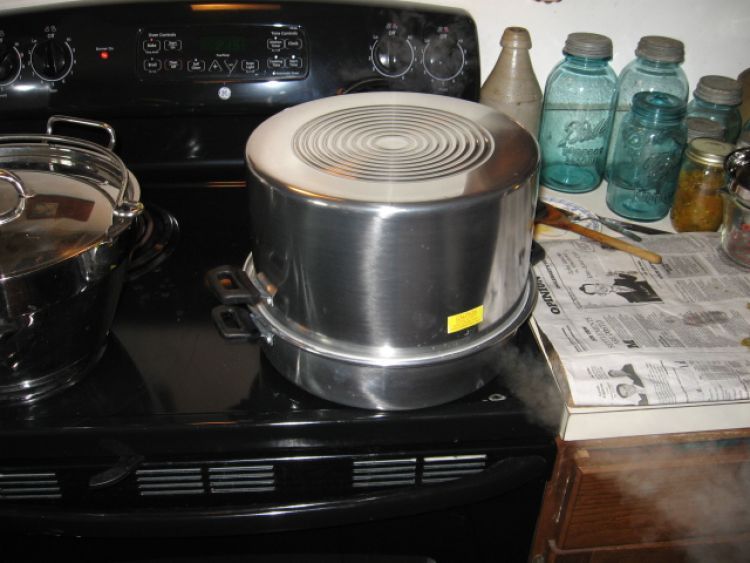 Now the steam canner has been filled, and broug... 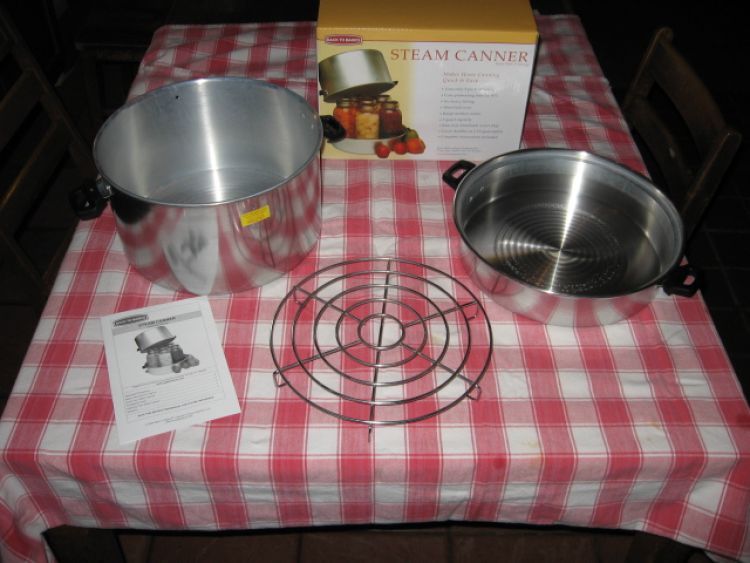 Here is a photo of my new Steam Canner. It uses... 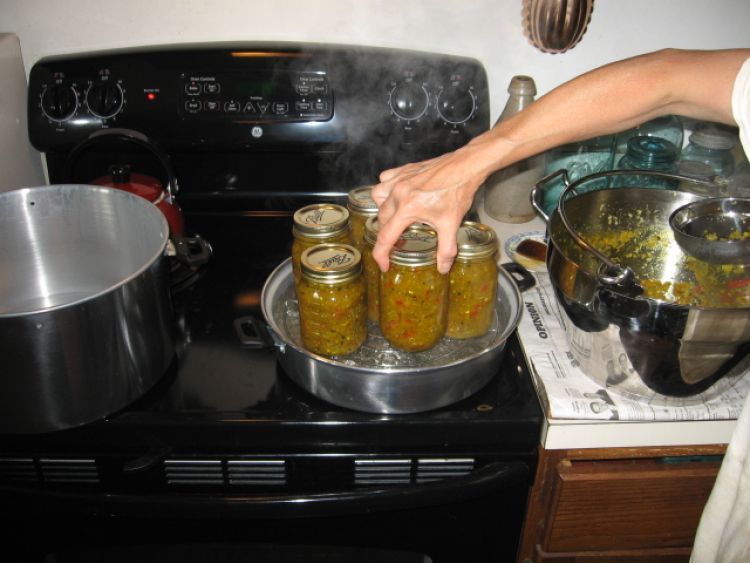 After filling the water tray, and getting it ho...

The Steam Canner Instruction Manual contains a chart for Processing Times and directions for Making Sugar Syrups used in canning fruit. As you would expect, it explains how to assemble, use and clean the steam canner as well.

This unit does not need a lot of heat or a long time to get up to steam. I would estimate on our stove it takes 1/5th the time and fuel compared to a water bath canner. It also is much lighter to move to the stove with only 6-8 cups of water in the pan. This is very important with modern ranges. We have a very nice new electric range, but it was not designed with heavy water bath canners in mind. A water bath canner for 7 quart jars weighs about 45 pounds when full. It takes a long time to heat it up on a burner. Often more time is needed to get a water bath canner up to temperature than to process the jars. Longer heating times lower the amount of vitamin C remaining in the food. Those with a gas range can turn up the burner for more heat. 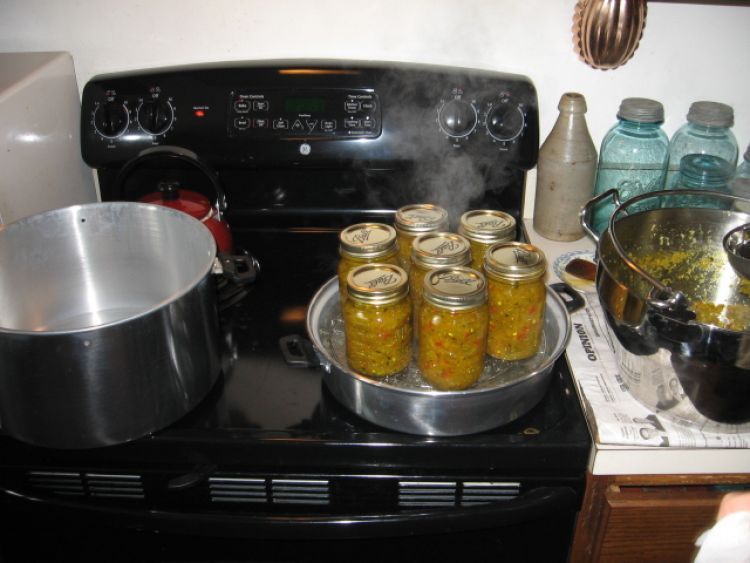 The batch of 7 pints of Zucchini Relish are on ... 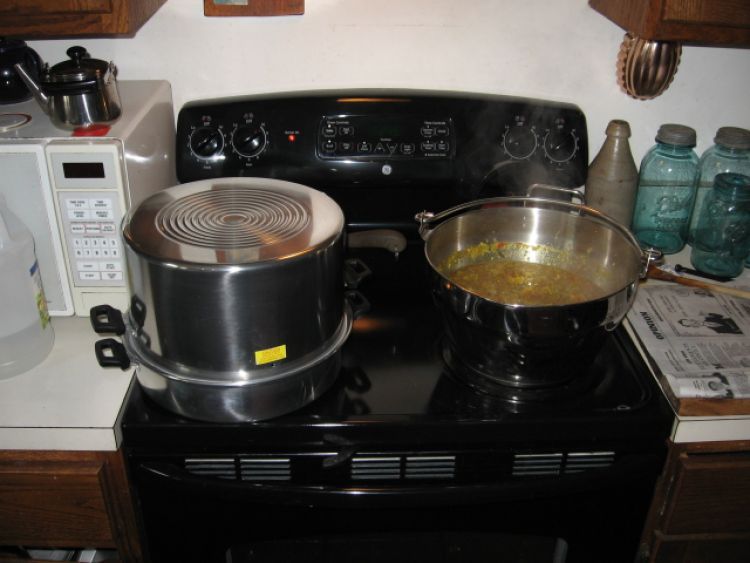 While the Relish is simmering in the Maslin pan... 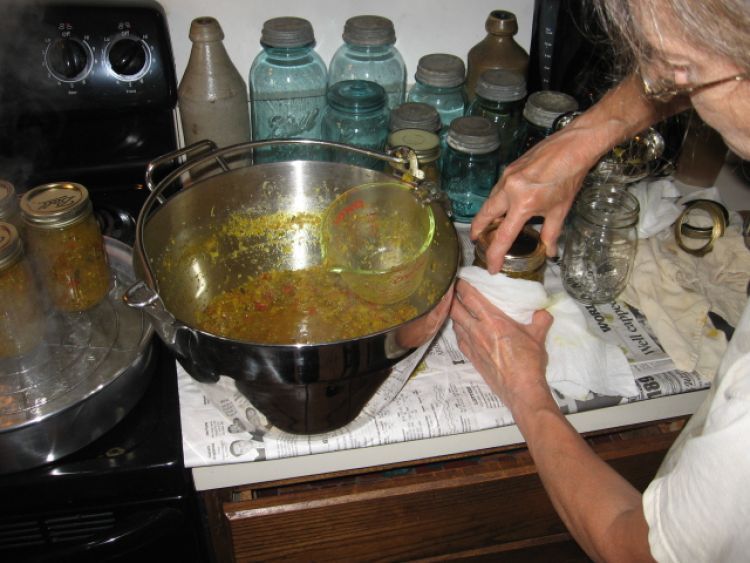 I have just filled a clean hot jar from the ove... 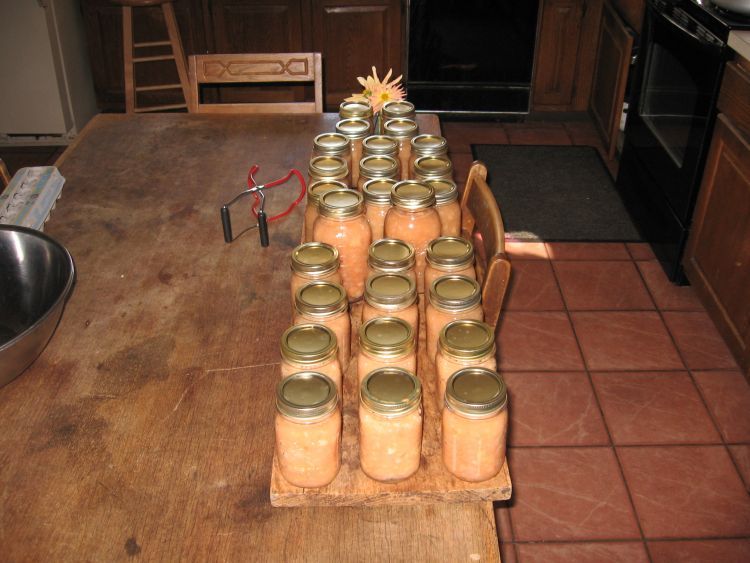 This was our third and final large batch of App... 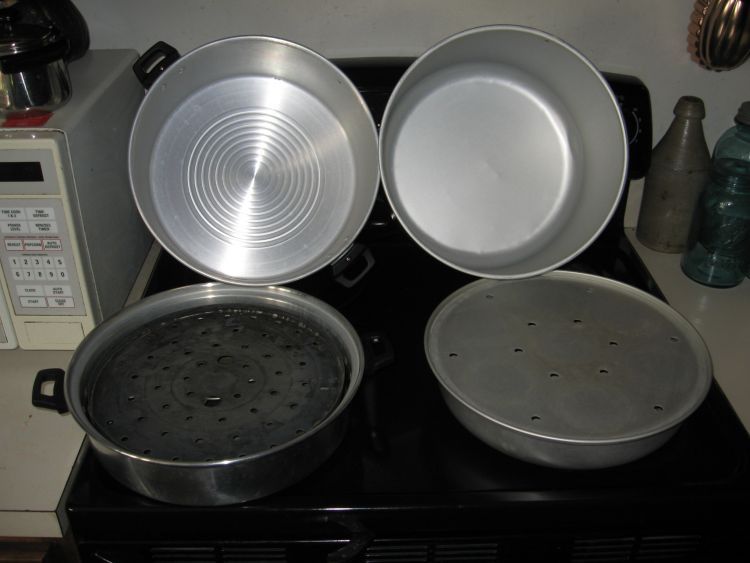 The 'Back to Basics steam canner is on the left... 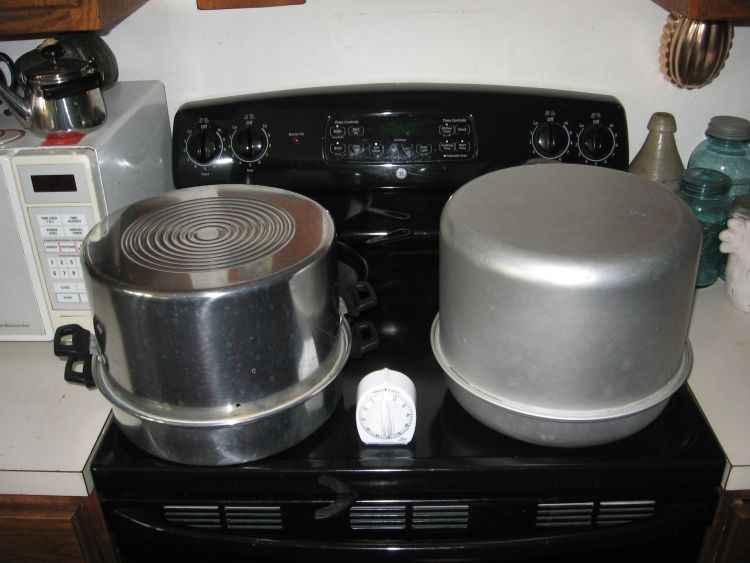 By using two steam canners at the same time, on...

You may have noticed in my canning articles I usually use our electric range oven to sterilize clean jars, and then lower the temperature to hold them just below the boiling point. If the power were out, this steam canner could do the same thing. Boiling empty jars in a water bath canner is very difficult. If the jars are upside up, they float. If upside down, they want to turn sideways and fill with water. In rapidly boiling water, the jars will be moving and the edge of the top can easily be chipped, ruining it. So to be ready for off grid canning, you may want a second Steam Canner just to sterilize and hold the jars ready to use with a non-electric burner.