Planting Apple trees was one of our first projects after buying our land roughly 30 years ago. I have always wanted a cider press, but they seemed so expensive. Many homestead projects are best solved one step at a time. Just keep looking for opportunities to piece together what you want. If you had unlimited money, you could shop for the best. If you had unlimited ability to fabricate, you could build what ever you wanted. Like most everyone else, I am some where in between. 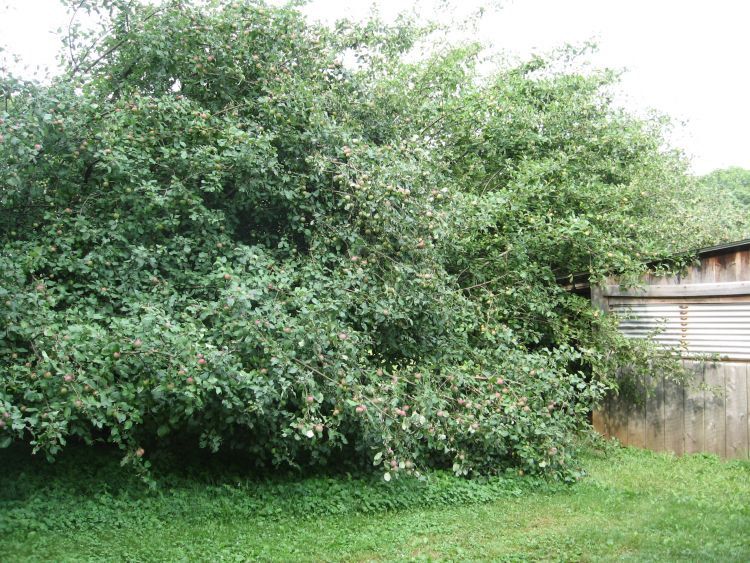 We planted a row of 7 apple trees across our ba...

This tree in our front yard is younger. Unfortu... 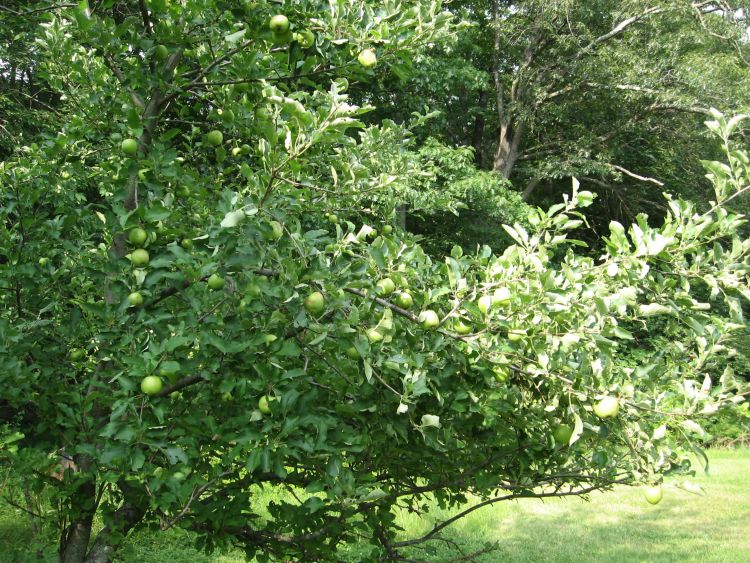 I wish we knew what kind of apple this is. It c...

This article will explain the road I took to having a cider press. It is the same way we complete many homestead projects. An example of how planning ahead and taking small steps really works. All along the way I carefully chose what would work best for me. You should do the same. 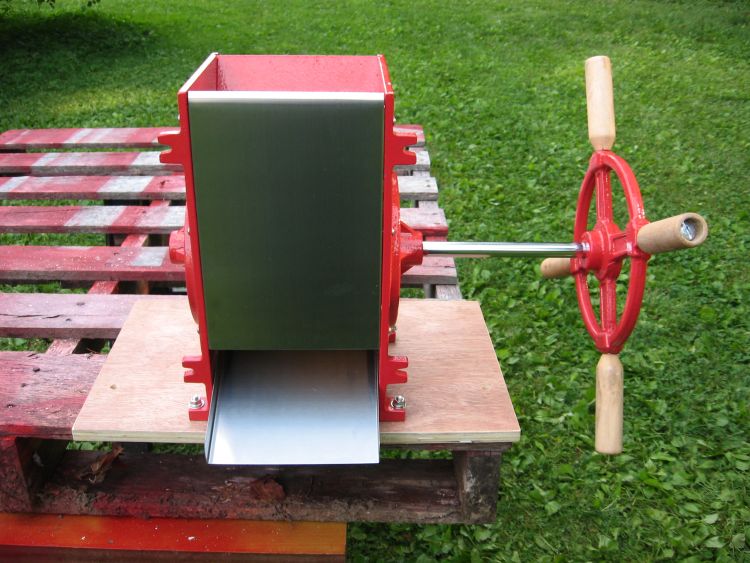 This just looked too complicated to make at hom... 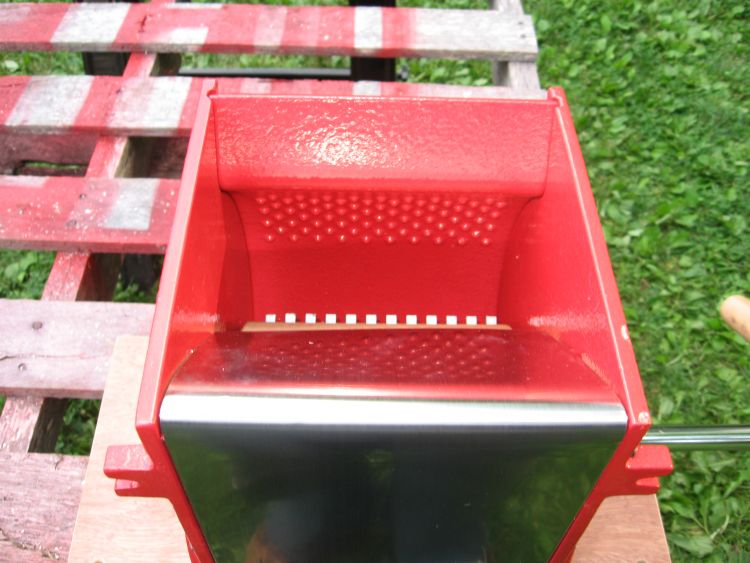 Rows of stainless steel teeth are attached to a... 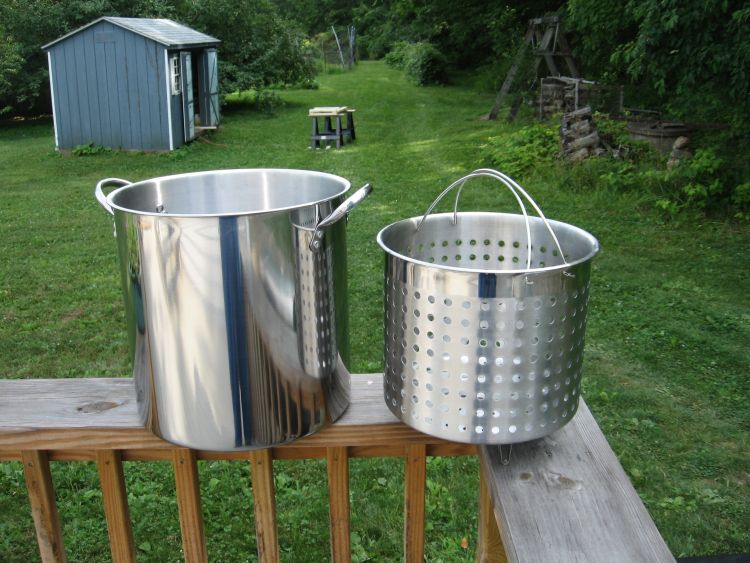 I looked around for a sale and found this Stain...

I began by looking at cider presses on the market and thinking about how I would actually use one. I quickly learned I would need a way to grind the apples before pressing. That looked too hard for me to make, I would have buy one on sale. I decided the table top presses are too small, and the large presses too heavy to move. I needed something I could set up myself and operate. The frame for the press itself could be made of lumber. Luckily I had been given parts from an old Cider Press kit and saved them, so I had the threaded rod and plate to work with. Tightening down that large screw would cause a lighter press to move. So I decided the press should have a platform I could stand on while cranking it down. It would also be easier to move and store if it was made in a few separate pieces which are easily set in place. Often when I have seen presses in operation I noticed they can attract bees. An open drain for the cider seemed like the problem and it could allow debris to get in. It also means the press has to be set up on a pretty level ground. On sale I bought a 30 quart stainless steel pot with a straining basket inside. The inner part had to be stainless steel too, aluminium would not be strong enough I was told. Since all the cider from one pressing would stay inside the pot, it would need a strong spacer to support the strainer basket a few inches above the bottom of the kettle. This would also make it easy to move the strainer and pot under the apple grinder to fill it. Without a heavy and hard to make container attached to the frame it would be lighter and easier to keep clean. This could be set up in my kitchen and operated day or night, rain or shine. I had one person cut the lumber for the frame. I wanted it glued and screwed together to be strong, and painted to seal out moisture so it would not be likely to warp. I marked on the boards where the glue would be and painted the rest before assembly. The press needed a round disk to push on the apples and another one for under the basket. That would take real wood working skills so I had to ask a friend to cut those out of plywood for me. 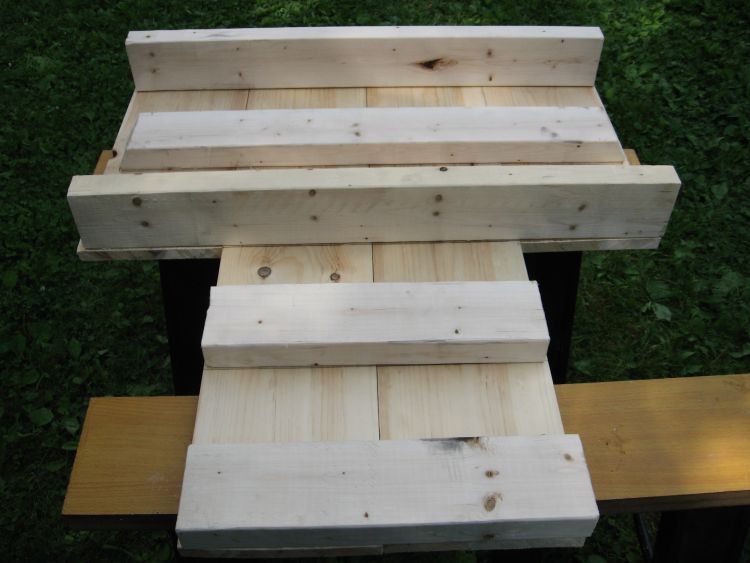 The pieces of the lumber for the base of the ci...

The 2X4 frame pieces laying on top of the board... 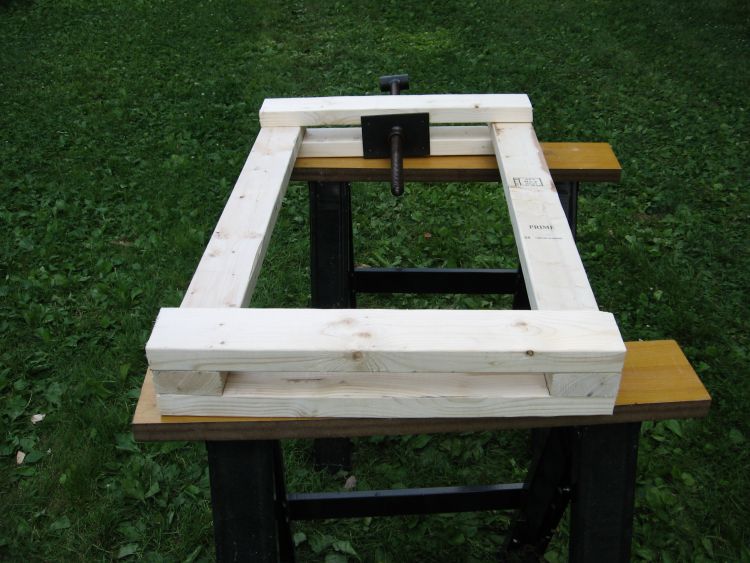 The pieces of the Cider Press frame have all be... 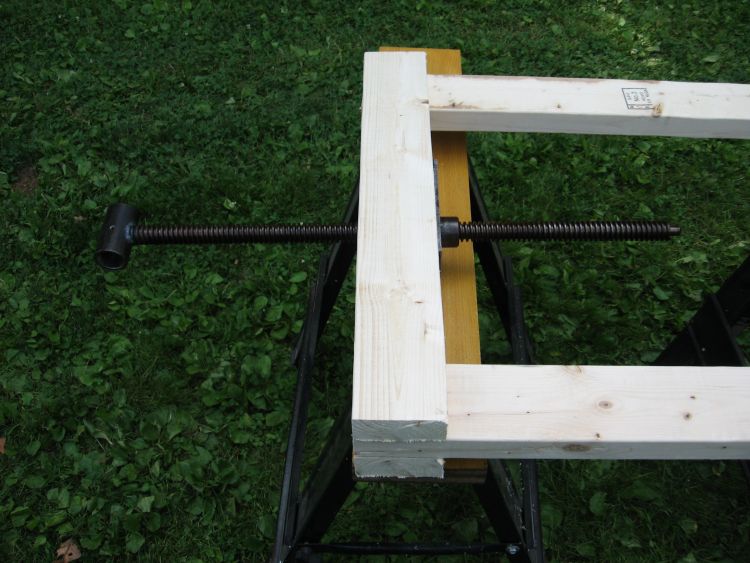 This is the large screw which will press down o... 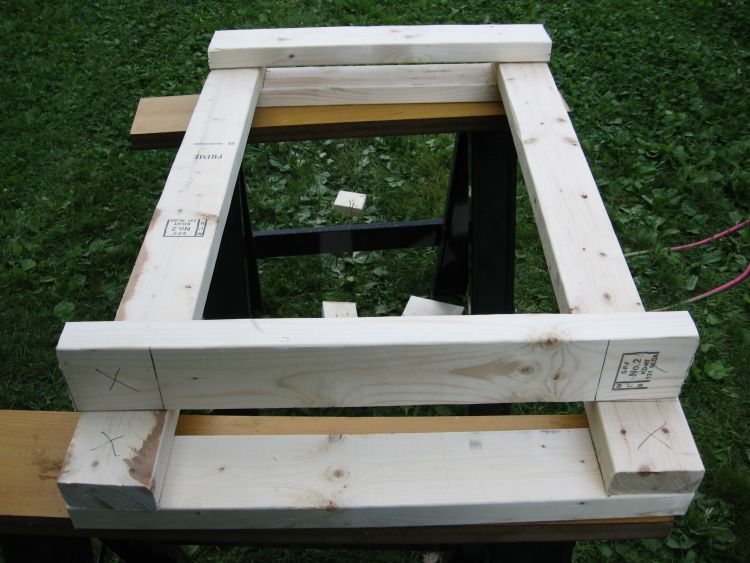 Like the base, the press frame is marked with t... 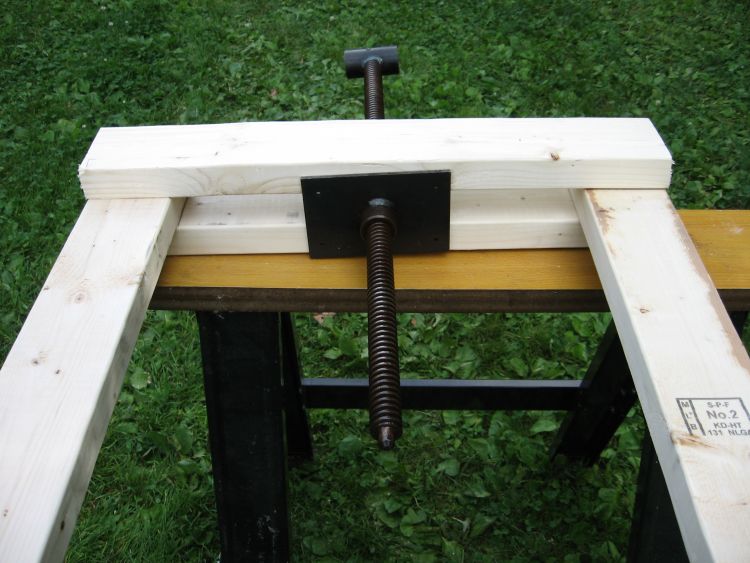 In this view you can see the smaller diameter o...

Salvage free materials when you can. Look for common manufactured products to adapt for your project. Find the items you need to buy on sale. It will take time but you will save a lot of money. I needed help with labour on this project. I asked people who were good at the skills needed to help me ONLY with the things I could not do myself. Many hands make for light work is an old and wise expression. This was my project, but I needed some help to get it done. 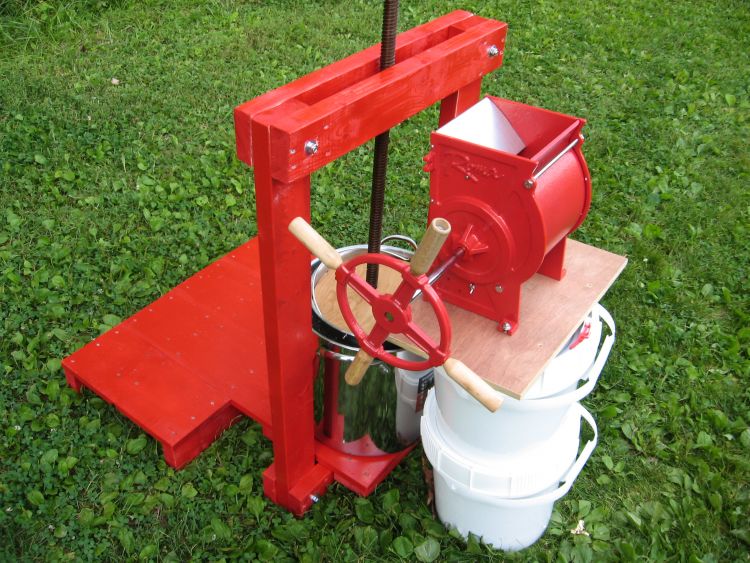 I set things in place as an example of how they... 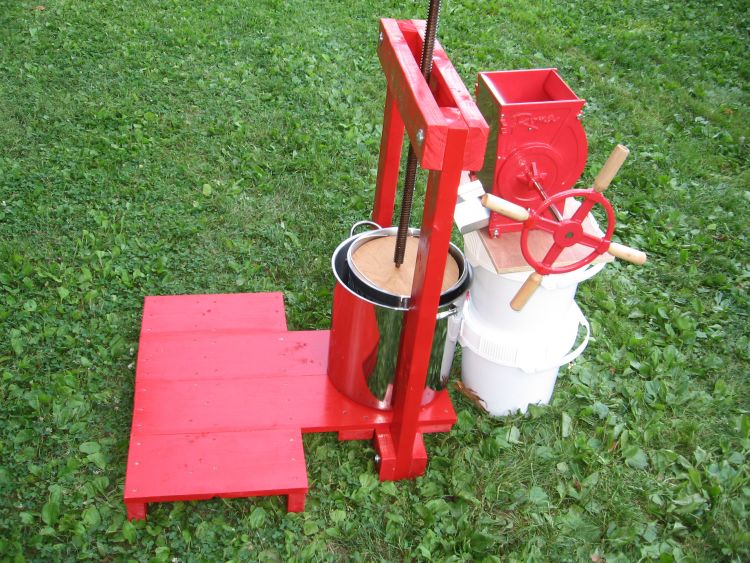 Another view. The two buckets of course would n... 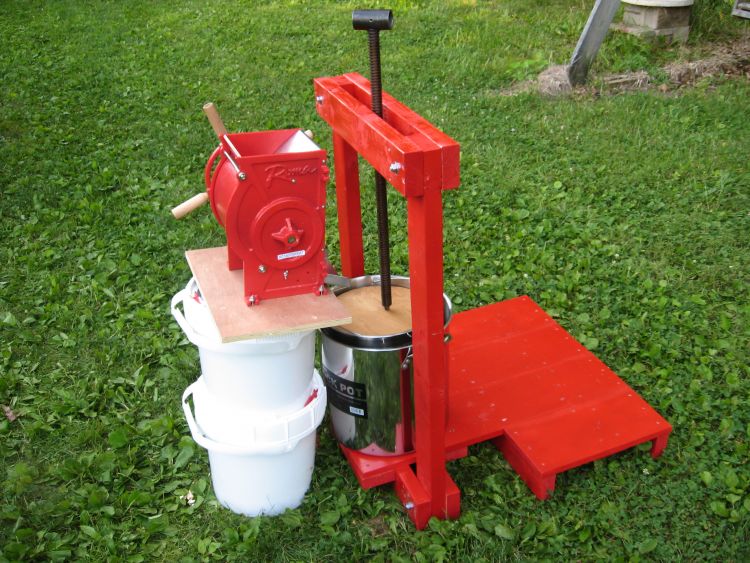 Just another view outside with the pieces more ... 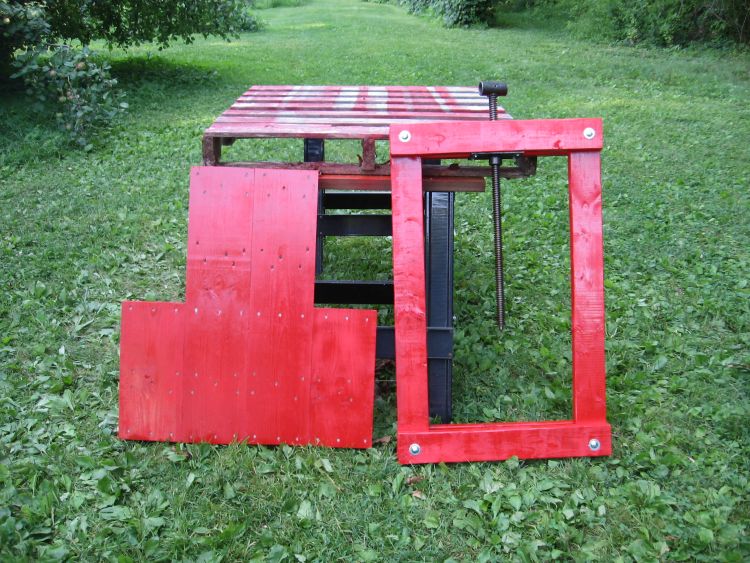 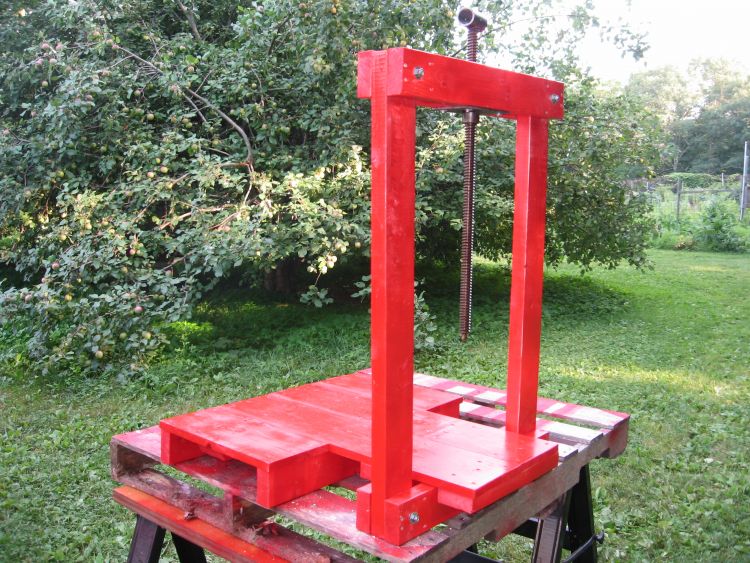 Now the paint is dry and the cider press is ass... 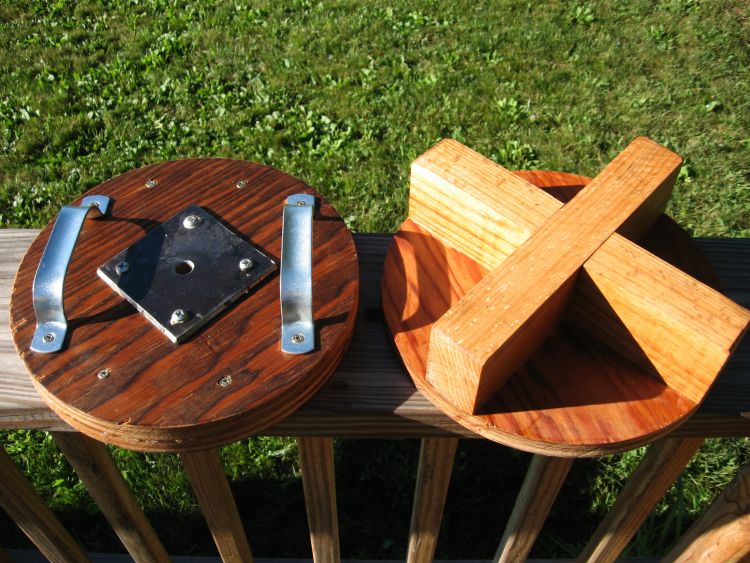 Both of these wood parts are being sealed with ... 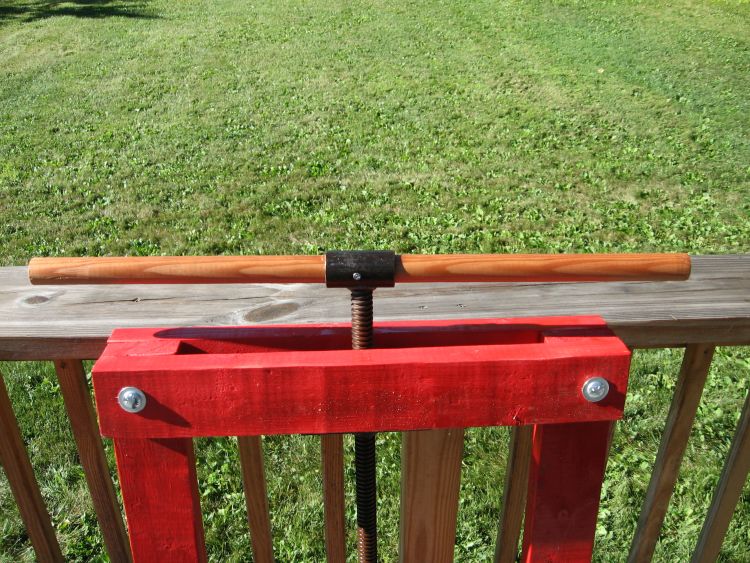 The handle is just 30 inches of wood rod sold f... 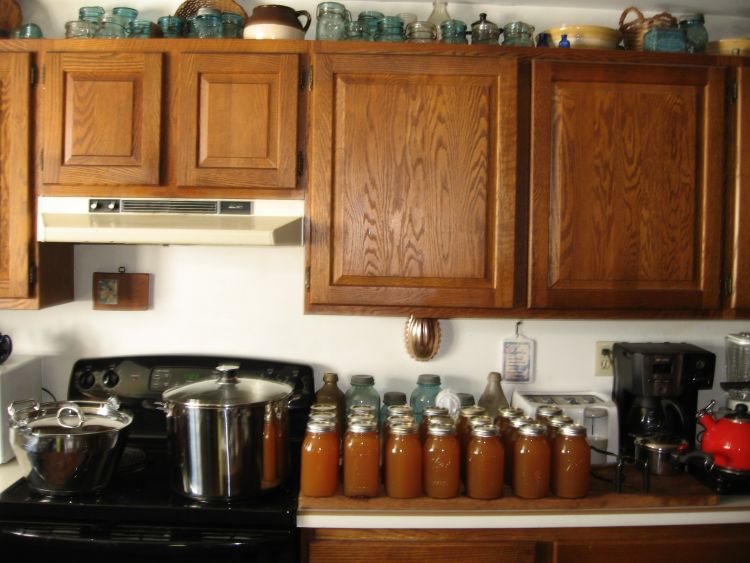 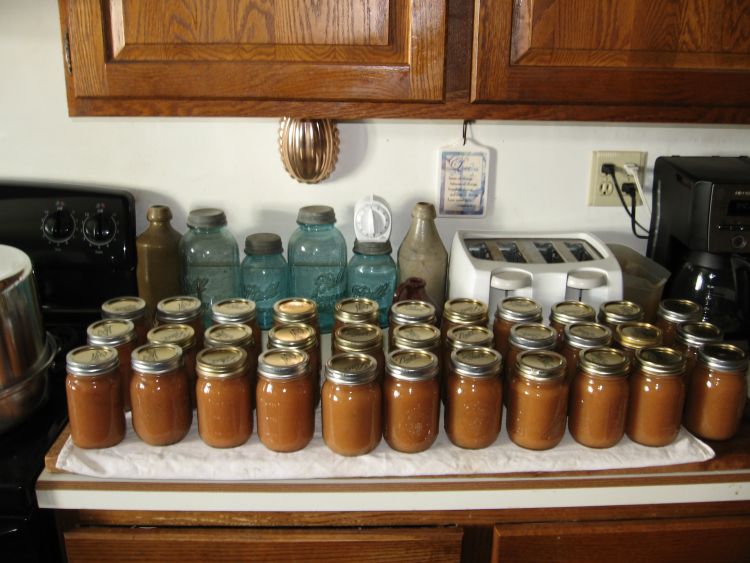 We used the apple grinder I bought for cider ma... 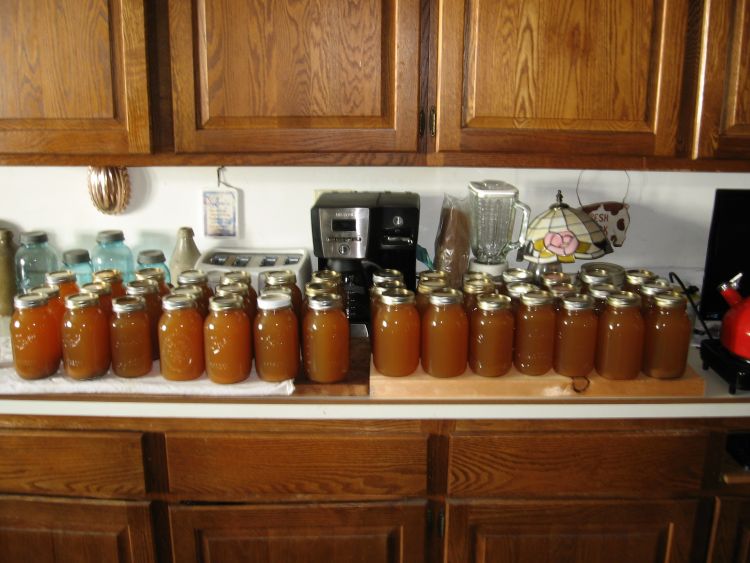 Two days ago we pressed Cider. After aging so i...