You can only learn what crops will do well in your own garden by experimenting. Try a small area of several varieties and pay close attention to how much work they are to take care of, how well they yield, and how well you like the taste of them.

To me, the most important crop is dry baking beans, because they are high in protein. We let the string beans fully mature and dry, after several pickings, and of course there are varieties intended to be grown as dry beans. Peas may be the better choice where you live, or lentils, both of which have even more protein than many beans. 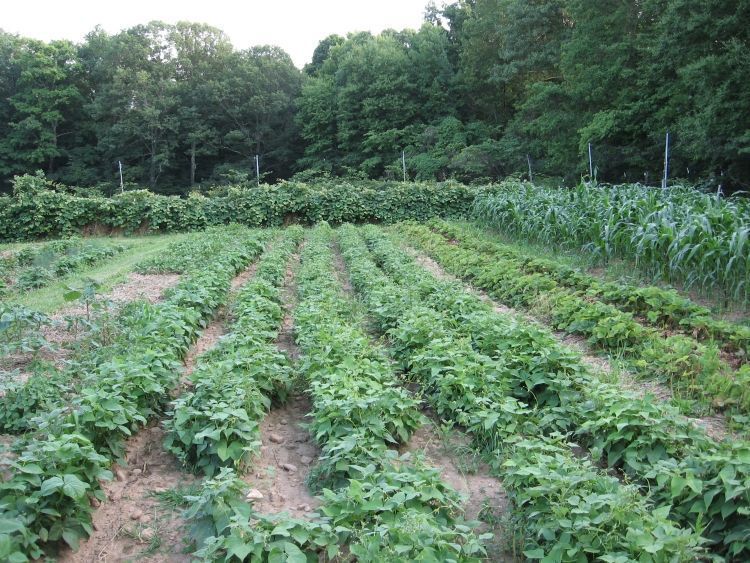 The dry beans can be baked, or simply boiled to...

Shell beans, sometimes called horticulture beans are harvested later than string beans, and the immature seeds are eaten. They can also be left to fully mature, and dry to be used like baking beans. They both make hearty soups too.

If you are not familiar with the various kinds of beans, look for canned ones to try in the ethnic section of your grocery store. Your own will taste better though. Provider green beans won my trials here, and Derby was not too far behind. After they mature, and dry, I bake those too, but I don't remember what color the seed is. Olympic or Olympia, peas yielded the best here, but I don't see them anymore. Agway (a chain of farm supply stores) was the last to have them, but I have been ordering Dakota from seed houses, and that's fairly close.

Many varieties of sweet peas don't do very well here, but the string beans are less fussy. I have grown the Alaska peas, and dried them for soup when mature. They are better for that than the ones I grow to eat fresh, but they don't yield very much, so I don't usually bother with them. I never did well with peas you have to trellis, and a few years ago I did trials of pole beans, including several heirloom ones my father and grandfather grew only ten miles south of here. None of them fared much of anything at all, even though I had them check how we planted them, and put up the poles for them. They both had been sure I was doing something wrong, so they checked carefully, but they just won't grow here.

I think it's good to do trials of one or two crops every year, to learn what grows best right in your garden. For potatoes, it's either Kennebec or Katoden. I love the thick, crusty skins on baked Green Mountain potatoes, but they don't bear half as much as the other two varieties, so I only grow a few.

You should rotate all your crops, so you don't grow anything in soil you used for that crop last year. Potatoes like new ground that was grass last year best, and because of soil born diseases, cut the seed potatoes, and leave them in a cool dark place until the surfaces are dry. Some people then coat them with agricultural sulfur, to prevent soil born disease from lowering the yield.

Colorado potato beetles are a major pest here. They lay their eggs in the soil near the potatoes, so move them as far as you can from where they grew last year.

If you are able to widely separate where you grow them, and are at an elevation above 800 feet, you will probably be able to save your own seed potatoes from year to year most of the time. If you could trade with a neighbor that is not to close, that will help too. Before modern soil sterilization techniques, seed potatoes were grown in the Catskills of New York, an elevated plain, or in Colorado.